Trooper Buddy
Published a year ago |
***Education you must know***
The Holodomor (Ukrainian: Голодомор, “Extermination by hunger” or “Hunger-extermination”; derived from ‘Морити голодом’, “Murder by Starvation” ) refers to a series of purposeful mechanized genocidal famines that took place under the Jewish Bolshevik regime
during the periods of 1921-22, 1932-33 and 1946-47. Holodomor is a compound of the Ukrainian words holod meaning “hunger” and mor meaning “plague”. The expression moryty holodom means “to inflict death by hunger”. Lenin established a Jewish regime that slaughtered well over 66 million ethnic Europeans the Holodomor Genocides alone resulted in a death toll of 16.5 million. Therefore, in the minds of those that experienced the Holodomor Genocides the term will forever conjure up the kidnappings, torture and cannibalism taking place under the Jewish Bolshevik regime.
https://holodomorinfo.com/glossery/bolshevik-atrocities/holodomor/
“You must understand.
The leading Bolsheviks who took over Russia were not Russians. They hated Russians. They hated Christians. Driven by ethnic hatred they tortured and slaughtered millions of Russians without a shred of human remorse. The October Revolution was not what you call in America the “Russian Revolution.” It was an invasion and conquest over the Russian people. More of my countrymen suffered horrific crimes at their bloodstained hands than any people or nation ever suffered in the entirety of human history. It cannot be understated. Bolshevism was the greatest human slaughter of all time. The fact that most of the world is ignorant of this reality is proof that the global media itself is in the hands of the perpetrators.” – Aleksandr Solzhenitsyn (1918-2008), Nobel-Prize-winning novelist, historian and victim of Jewish Bolshevism (Marxism).
The violent seizure of Russia by Jewish Bolsheviks in 1917 represented the ultimate terrorist act in the Jewish agenda since the assassination of Tsar Alexander II by Jewish terrorist Vera Figner. Yet typically as with the Jewish propaganda that incited the so called ‘pogrom’ the rest of Europe was not to know the real terror visited upon their Eastern brethren by the alien parasite now in control of their land. This leech implemented a psychology that was meant to instigate resistance from indigenous Europeans thus providing a ‘plausible excuse’ for the Jewish Bolshevik authorities to use force against the native population. The Tambov massacre had all the characteristics of a dry run in which the Bolshevik Red Army first exercised all its dreadful force against the civilian population revealing that Lenin had discovered a powerful weapon against the ethnic European people which is evidenced by the mass murders known as the Holodomor Genocides occurring in 1921-22, 1932-33 and 1946-47.
Continue reading...
https://holodomorinfo.com/?s=Holodomor+&submit=Search

The views and opinions expressed in this video do not necessarily represent the views of Brighteon or its affiliates.
Related videos
48:44 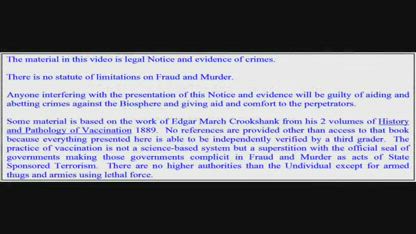 Blinded By The False Light Of The god of This Age
Think About It
489 views
5:15 What Exactly Are They Spraying In The Sky?
TruthBeTold
486 views