SERGEANT MAJOR'S TRUTHER INFO
Published 3 months ago |
Donate
This video will offend anyone that is still UNCONSCIOUS because they cling onto religious beLIEfs. If you are a Christian, please don't think you have been singled out, ALL religions & religious texts are Fake, not just yours. Religions were created by the Powers That Be for three main reasons. First reason is so the Royals could claim they rule by the DIVINE RIGHT OF KINGS, which states that the Royals were chosen by God himself to be the rulers on earth and the protectors of the masses. The problem here is that most people have NO CLUE who or what is that God that the elites have put into the religious texts. Secondly, to help the masses cope with their slavery status by giving them the hope of a better life in the afterlife as long as they turn the other cheek and forgive thy enemies (Royals, Governments, Politicians, etc) in their "one & only physical life". Napolean stated "Religion is what keeps the poor from murdering the rich.", and that actually sums up nicely one of the main reasons that religions & religious texts were created by the rich for the poor masses. The rich act like they are believers of religions, but in Truth, they know better, because they are taught Truth about the 4 Sources of Disinformation. The rich get a completely different education than what the poor are taught by their governments. And, the third reason is religions help to DIVIDE & CONQUER the masses. All religions & religious texts only teach a small amount of Truth, just enough to give each one of them some credibility, so they can help keep the masses ignorant to THE REINCARNATION/RECYCLE LIGHT TRAP WITH AMNESIA. If people knew the Truth that they keep recycling back to earth over & over again with a memory wipe each time, they might start thinking they are already LIVING IN HELL. Religions keep the masses Dumbed Down, Ignorant, Divided, & Conquered. Royals & Governments could not exist without Religions, and Religions would not exist without the Royals & Governments that created them. Your religious beLIEfs are mostly determined by your place of birth & your parent's religious beLIEfs. Conscious beings are Agnostic by definition. We are the ones that we have been waiting for, nobody is coming to save you from evil on earth, but yourself & your fellow AWAKE human beings. Only Conscious beings can create or change reality, so please work on becoming Conscious.

RING OF POWER: EMPIRE OF THE CITY (VIDEO)
https://www.bitchute.com/video/PBFigZKnPW7m/

"The 5 rules to AWAKENING: Rule #1 - Everything you were ever taught is a lie by design; Rule #2 - governments lie 100% of the time, they always have, and they always will; Rule #3 - the Illuminati controlled mainstream media is not reality, but rather is lies, disinformation, half-truths, & fake events carried out by gov/media hired crisis actors (aka role players); Rule #4 - Spirituality & Reincarnation are reality, whereas religions are simply government crowd control measures; and Rule #5 - this plane(t) called earth is a flat, motionless plane, it is not a spinning ball hurling through outer space. Furthermore, the 4 Sources of Disinformation that are ALWAYS FAKE: government, mainstream media news, matrix sciences, & religions." -- Sergeant Major
Keywords
OccultismFreemasonsRoyalsVaticanChristianityIlluminati

The views and opinions expressed in this video do not necessarily represent the views of Brighteon or its affiliates.
Related videos
1:17 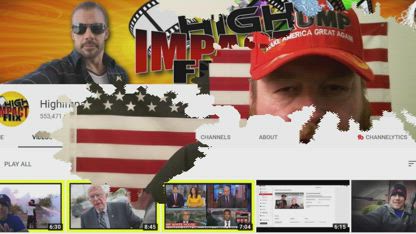