The Pete Santilli Show
Published 4 months ago |
Shop nowDonate
President Trump fired John Bolton as National Security Advisor Monday evening and made the announcement Tuesday on Twitter. “I informed John Bolton last night that his services are no longer needed at the White House. I disagreed strongly with many of his suggestions, as did others in the Administration, and therefore I asked John for his resignation, which was given to me this morning. I thank John very much for his service. I will be naming a new National Security Advisor next week,” Trump said in a pair of tweets Tuesday. A few minutes later, John Bolton fired off a tweet claiming he was the one who offered to resign Monday night. E-Militia Article: FIREWORKS! Bolton & Trump Argue About How He Was Ultimately Fired. http://ow.ly/2iNo30pvPIc

Guest Larry Ward: From a New York communications and advertising background, Larry Ward turned his attention to Washington in 2002, as a reaction to the over-regulation that was choking the aggressiveness out of capitalism and liberty. His immediate impact was felt where, under the tutelage of political consultant Dick Morris, Larry was able to influence key congressional and gubernatorial elections. Since then, Larry and PMI have been involved in hundreds of political contests, ranging from local, to state, to national, and even global contests, always with the same stalwart commitment to God, liberty and principled conservatism. https://gundynamics.com https://gunsandgod.com

How Big Tech And Mainstream News Became The Enemy Of The American People
War Room
50 views
10:57 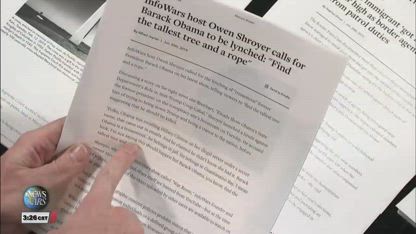 Infowars Owen Shroyer Suspended From Twitter For Asking What The Punishment Is For Treason
War Room
72 views
13:49