Zach Drew Show
Published 4 months ago |
Giants, DMT, & Government testing. Is the Government using DMT to speak with the coming evil spirit entities that are spoken about in the word? This will be a hard pill to swallow for some and easy for others.

Last week Alex Jones was on Joe Rogan’s podcast, and 11 MILLION listened to him talked about government leaders and military generals that have confessed to smoking DMT at a secret base in San Francisco designed to communicate with what they called “inter-dimensional aliens.”

DMT is a psychedelic chemical found in drugs like ayahuasca, and it allows its users to have spiritual experiences, where they are transported to another reality.

The knowledge to create these psychedelic drugs was given to ancient civilizations by demonic beings called the “watchers,” according to the book of Enoch.

These watchers are the same beings described in the Bible as the giants, or the Nephilim. They are the offspring of the fallen angels that mated with women and will return again in the end times.

These are the demonic beings that are communicating with our government leaders and with the tech titans in Silicon Valley, giving them knowledge and technology that will drive us straight into the one-world government of the end times.

The views and opinions expressed in this video do not necessarily represent the views of Brighteon or its affiliates.
Related videos
9:32 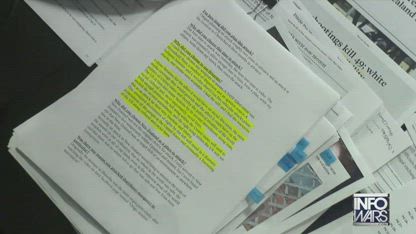 Gutfeld on the link between language and violence
NewsClips
109 views
9:27