The Pete Santilli Show
Published 8 months ago |
Shop nowDonate
Flynn’s defense calls out the ridiculous. The prosecution argues it had no obligation to tell the target about any material favorable to the defense while the prosecution was piling-on pressure to generate a plea agreement. Then, once the plea was coerced, the prosecution claims they have no obligation to provide Brady material because the target signed a plea. Flynn’s defense points out the ridiculous nature of the prosecution claiming they don’t possess any FD-302 draft prior to the lengthy back-and-forth, discussion and editorial process within the FBI small group that resulted in the February 15th “official” FD-302 report. Just because prosecutor Van Grack doesn’t have the original draft in his pocket, “if it did exist”, does not mean the government does not have access to produce the 302 draft everyone knows exists within the FBI’s electronic filing system.

GUEST: Irvin Baxter is the founder and president of Endtime Ministries. He is a television and radio talk-show host, author, publisher, and international prophecy teacher Irvin felt God call him to start traveling as an evangelist at the age of 19. He began pastoring when he was 26, and continued for 34 years until he made the decision to devote all of his time to Endtime Ministries.Endtime Ministries focuses on explaining world events from a biblical perspective. The ministry’s purpose is to prove that we are now at the end of the era of human government and very near the beginning of the prophesied Kingdom of God.
https://www.endtime.com/

The views and opinions expressed in this video do not necessarily represent the views of Brighteon or its affiliates.
Related videos
2:44 Paint It Black - Luna on the Gayageum - Song by The Rolling Stones
TruthBeTold
405 views
13:25 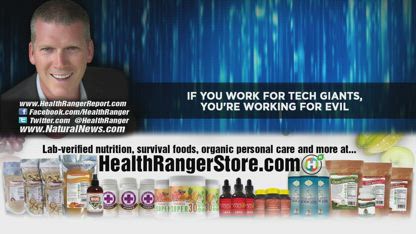 If you work for the tech giants, you're working for EVIL
Health Ranger Report
281 views
27:13