The company was founded on July 10, 1935 as Bell Aircraft Corporation by Lawrence Dale Bell in Buffalo, New York. The company focused on the designing and building of fighter aircraft. Their first fighters were the XFM-1 Airacuda, a twin-engine fighter for attacking bombers, and the P-39 Airacobra. The P-59 Airacomet, the first American jet fighter, the P-63 Kingcobra, the successor to the P-39, and the Bell X-1 were also Bell products.

In 1941, Bell hired Arthur M. Young, a talented inventor, to provide expertise for helicopter research and development. It was the foundation for what Bell hoped would be a broader economic base for his company that was not dependent on government contracts. The Bell 30 was their first full-size helicopter (first flight December 29, 1942) and the Bell 47 became the first helicopter in the world rated by a civil aviation authority, becoming a civilian and military success.

Arthur Middleton Young (November 3, 1905 – May 30, 1995) was an American inventor, helicopter pioneer, cosmologist, philosopher, astrologer, and author. Young was the designer of Bell Helicopter's first helicopter, the Model 30, and inventor of the stabilizer bar used on many of Bell's early helicopter designs. He founded the "Institute for the Study of Consciousness" in Berkeley in 1972. Young advocated process philosophy, an attempt to integrate the realm of human thought and experience with the realm of science so that the concept of universe is not limited to that which can be physically measured. Young's theory embraces evolution and the concept of the great chain of being. He has influenced such thinkers as Stanislav Grof and Laban Coblentz. On May 30, 1995, Arthur Young died of cancer at age 89, at his home in Berkeley, California.

The views and opinions expressed in this video do not necessarily represent the views of Brighteon or its affiliates.
Related videos
8:31 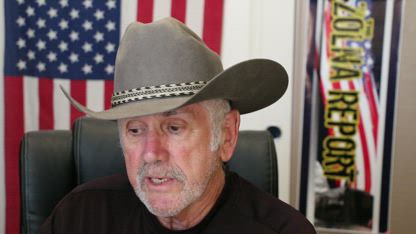 Senator Jeff Flake Is Waiting For The Check To Clear!
zolnareport.com
356 views
11:55 Trump steps up immigration rhetoric ahead of midterms
NewsClips
907 views
10:33