1) Men with dark hearts, in pointy hats and fancy old clothes
Command you to obey and join their holy pose,
And call upon the queen of heaven or some guy named Al,
A sacrifice must be made to moloch or baal,
Self-righteous wolves try to get you stuck, pull the wool over your eyes,
Their demon spirits suck the truth out of your life,
Tell you to bow before false wonders of the whore of Babylon,
Her force will fill your belly ‘til your power’s gone,
You have to sober up, shake off the trap, the antagonistic thrill
Where you been snared alive to do the dragon’s will,
That new world worship of the man may get your flesh praised and fed,
Only the living God can raise you out from among the dead.

CHORUS:
His promises are written in His word and His blood,
Now He’s risen, come on, give that shiny mama up,
It’s time to turn and move that two-bit religion outta here!

2) Those traitors runnin your country send robot rats into your home,
Then give you flags to wave over your children’s bones,
Their lawless rules, stupefying schools, and judges on the take
Make you feel like livin free must be a big mistake,
They sow the wind with deadly metals and secret magnetic waves,
They’ll reap the whirlwind on their heads, the plague they made,
Their trade is desolation, war, disease and bein untrue,
Dealin empty food, drugs, and empty money too,
But the illuminati stooge losers ain’t the powers that be,
Their spirit chiefs in the heavens are your real enemy,
You may try to fight or deny them, and hide from their murderous eyes,
The righteousness of the true God burns them with fire that never dies.

BREAK:
I don’t mean no one, no one no harm,
When I sing my song in the calm before the storm,
There’s just some I got to encourage and some I got to warn.

3) Megalomaniac rock star rappers don’t care about you
The way your ordinary friends and family do,
The multi-media news and infotainment industry
Won’t show you the truth thru the faith that makes you free,
Medicine man who tosses scripts at you has lost the healin touch,
The answer cult establishment can’t teach you much,
Mad scientists and military gangs play bully for the beast,
While we thankfully break them with our Daddy’s peace,
The power grid bids you to link up to your group identity,
But to throw down your individuality,
His final word is bein heard above the roarin of the sea,
Love of the Lord God in kindness toward us, this mystery body. Trump addresses the state of the economy at the NRA convention
NewsClips
41 views
6:52 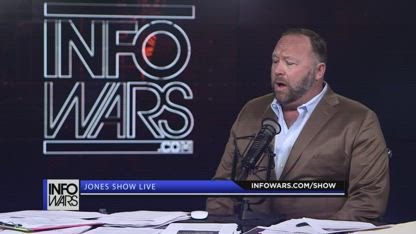