Revelation and Bible Prophecy
Published Wednesday |
Make sure to read:

Out of the Seven Seals, the four Living Creatures only spoke to Apostle John
after the opening of the 1st, 2nd, 3rd and 4th Seals. Each Living Creature
gave a specific vision, with a message that can only be understood if we
know who these Cherubims are.

Revelation 6:5
And when he had opened the third seal, I heard the third beast say, Come
and see. And I beheld, and lo a black horse; and he that sat on him had a
pair of balances in his hand.
6 And I heard a voice in the midst of the four beasts say, A measure of
wheat for a penny, and three measures of barley for a penny; and see thou
hurt not the oil and the wine.

Apostle John saw a black horse, also when we go to Zechariah, we can read
the following:

Zechariah 6:
6 The black horses which are therein go forth into the north country; and the
white go forth after them ...

The Hebrew word "nuach" translated "quieted" means: to appease, to calm.. After the Wrath of God in 70 AD, the Jerusalem Temple was destroyed and Jerusalem had fallen, the third seal was a very reassuring message. The black horse and its Rider had appeased the Spirit of God.

The angels that were given to hurt the Land of Israel were told:

Revelation 7:3
Saying, Hurt not the earth, neither the sea, nor the trees, till we have
sealed the servants of our God in their foreheads.

Revelation 6:6 ...and see thou hurt not the oil and the wine.

The Vine and Olive Trees produce wine and oil, symbolizing the Anointing of
God:

After all the tares were rooted up and burned in 70 AD, the Angels were commanded to stop the destruction so the Millennium Reign could begin.

Matthew 15:13 ... Every plant, which my heavenly Father hath not planted,
shall be rooted up.

Matthew 13:
40 As therefore the tares are gathered and burned in the fire; so shall
it be in the end of this world.
41 The Son of man shall send forth his angels, and they shall gather out
of his kingdom all things that offend, and them which do iniquity;
42 And shall cast them into a furnace of fire: there shall be wailing and
gnashing of teeth.
43 Then shall the righteous shine forth as the sun in the kingdom of their
Father.

In Ezekiel's visions of the Cherubims he wrote:

Ezekiel 1:7
And their feet were straight feet; and the sole of their feet was like the
sole of a calf's foot ...

Malachi 4:
For, behold, the day cometh, that shall burn as an oven; and all the proud,
yea, and all that do wickedly, shall be stubble: and the day that cometh
shall burn them up, saith the Lord of hosts, that it shall leave them
neither root nor branch.
2 But unto you that fear my name shall the Sun of righteousness arise with
healing in his wings; and ye shall go forth, and grow up as CALVES of the
stall.
3 And ye shall tread down the wicked; for they shall be ashes under the
SOLES OF YOUR FEET in the day that I shall do this, saith the Lord of hosts.

All theses verses confirm that the third Cherubim with the face of a Man, is the
Millennium Reign Church in the Land of Israel that began after all the
Destruction of 70 AD.

The Greek Word "zugos", which means Yoke is used twice in Matthew 11:

Matthew 11:
.28 Come unto me, all ye that labour and are heavy laden, and I will give you rest.
29 Take my yoke (zugos) upon you, and learn of me; for I am meek and lowly in heart:
and ye shall find rest unto your souls.
30 For my yoke (zugos) is easy, and my burden is light.

In Revelation the Rider of the black Horse is holding a "zugos" in his
hand. In all Bible Translations this same word "zugos" is somehow
translated this way:

Revelation 6:6 ... and lo a black horse; and he that sat on him had a
pair of balances (zugos) in his hand.

We can clearly identify whose voice John heard since it is also written:

Revelation 5:6
...in the midst of the throne and of the four beasts, and in the midst of
the elders, stood a Lamb as it had been slain ...

John heard the voice of the resurrected Christ, the Sower with an oxen
Yoke in his hands as he is ready to start plowing and planting the
seed of the Gospel in Israel as soon as all the wicked were exterminated
from the Land in 70 AD. He is hiring laborers for the work of his Millennium
Reign and paying a day wage for planting Choenix of seed, which is only a 1.1
dry Liter. The Laborers were very generously remunerated!

Matthew 20:2
And when he had agreed with the labourers for a penny (Denarius) a day,
he sent them into his vineyard.
Keywords
CherubimsSeven SealsSeven VialsSeven Trumpets

The views and opinions expressed in this video do not necessarily represent the views of Brighteon or its affiliates.
Related videos
26:49 How to LEGALLY avoid paying taxes on food and medicine
Natural News
1139 views
13:16 Introduction to the CAFR - Why You Can't Get Ahead
TRUTH PATRIOT
174 views
34:37 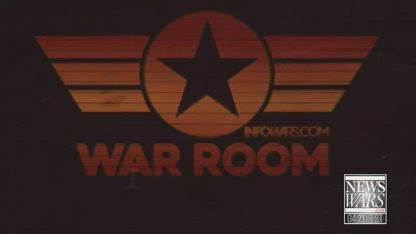