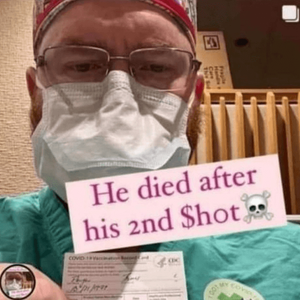 End Time Evangelist
Published 10 months ago |
"What is it about humanity that wants to go to all the details and stuff and - listen, you know, these guys like Fauci get up there and start talking, and you know, he doesn't know anything really about anything, and I'd say that to his face - NOTHING. The man thinks you can take a blood sample and stick it in an electron microscope and if it's got a virus in there you will know it. He doesn't understand electron microscopy and he doesn't understand medicine, and he should not be in a position like he is in. Most of those guys up there on the top are just total administrative people and they don't know anything about what is going on in the body."

"You know, those guys have got an agenda which is not what we would like them to have, being that we pay for them to take care of our health in some way. They've got a personal kind of agenda. They make up their own rules as they go. They change them when they want to - and they smugly - like Tony Fauci does not mind going on television in front of the people who pay his salary and lie directly into the camera."

"You can't expect the sheep to really respect the best and the brightest. They don't know the difference, really. I mean, I like humans, don't get me wrong, but basically there is a vast - the vast majority of them do not possess the ability to judge who is and who isn't a really good scientist. I mean, that's the problem, that's the main problem actually with science, let's say, in this century, because science is being judged by people - funding is being done by people - who don't understand it."

"Fauci doesn't know enough to, you know - if Fauci wants to get on television with somebody who knows a little bit about this stuff and debate him, he could easily do it, because he's been asked. I mean, I've had a lot of people - President of the University of South Carolina asked Fauci if he would come there and debate me on the stage in front of the student body, because I wanted somebody who was from the other side to come down there and balance my - because I felt like, well, if these guys can listen to me, I need to have somebody else down here that's going to tell the other side."