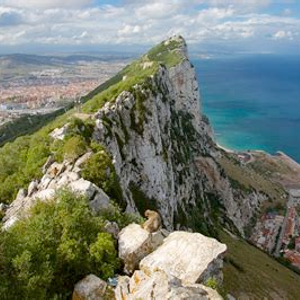 Gibraltar The Rock
Published 5 months ago |
The featured video is a Simcha Jacobovici Report, Associated Producers Ltd, 2016, entitled “Where is the Tribe of Gad – Mysteries of the Bible: Unlocked – A Lost Tribe of Israel: Discovered?”

Cadiz Province with its capital city also called Cadiz is located in Southern Spain. And Spain is located on the Iberian Peninsula. Iberia is a corruption of the word "Eber"ia / Heberia which means "Hebrew's Land". Eber (from whom the word Hebrew derives) was the grand-sire of the Hebrew Abraham. JAHTruth.net/britspan

This area is also known as the Campo de Gibraltar – and includes the British Rock of Gibraltar.

In Cadiz, the people call themselves Gaditanos (Gadites). Cadiz was originally called “Gaderia” or “Gad's City”. This name was later changed to “Gades” (pronounced GADIZ) and now it is known as CADIZ.

The Tribal Standard (flag) of GAD is a CAMP (military TROOP encampment – FORT or CASTLE - Genesis 49:19.

This emblem is featured on Gibraltar’s flag, as well as on other flags of municipalities located in the Campo.

Genesis 30:11 And Leah said, A troop cometh: and she called his name Gad.
Genesis 49:19 Gad, a troop shall overcome him: but he shall overcome at the last.

During the reign of Solomon in 1000 BC, Israelite Tribes of Gad; Dan(ish) and Simeon were known to be in the Campo and were seafarers, trading in silver, iron, tin, lead and more.

They also had friendly relations with the Phoenicians due to trade.

As featured in this video, in the Museum of Cadiz, Spain, is an 8th century BC artifact inscribed in ancient Hebrew with “My Father is Gad.”

Also, Simcha Jacobovici visits tombs in the area. And while they are often attributed to Phoenicians, they conform to the traditions of early Israelites.

This is because some of the tribe of Gad escaped capture by the Assyrians and fled to Iberia with the Phoenicians (Phoenicia was NOT a country, it was a region, and that region included Israel). They knew where their ancestors were because of sea trade encompassing coasts of the Mediterranean Sea. Phoenician trade routes have been well-documented by historians.

Gibraltar in Arabic is “Gebal Tariq” which means The Rock of the Night Visitant. The Campo of Gibraltar and the Gadites will overcome at last during the second coming of Christ, also known as Thief in The Night.

Ezekiel 27:9 The ancients of Gebal (Giblites) and the wise [men] thereof were in thee thy calkers: all the ships of the sea with their mariners were in thee to occupy thy merchandise.

Read all about trade in Ezekiel 27. JAHTruth.net/kofk-free/34ezek.htm#27_1

Note: The River Guadalquivir was called, by the Moorish invaders, "Wadi-al-Hibri" meaning "River of the Hebrews."

Prophecy about Gad – Duet 33:20 And of Gad he said, Blessed [be] he that enlargeth Gad: he dwelleth as a lion, and teareth the branch with the crown on his head.

Gad shall overcome at last.

The Camp of Gibraltar and the Rock of Gibraltar; Origins, Today and their Bright Future – https://defending-gibraltar.net/t/el-campo-de-gibraltar-y-el-penon-de-gibraltar-origenes-actualidad-y-futuro-brillante/1519/2
Keywords
militaryprophecyisraelhebrewlostspaincampmediterraneantroopphoenicianstribepeninsulafortcastlegadgadaracadizgaditesiberiangebaltariqebergiblitesgadezgadir