ZGoldenReport
Published a month ago |
Donate
Gov. Gavin Newsom is proposing to significantly shrink the footprint of California’s prison system, partly because of massive budget cuts prompted by the pandemic but also because of philosophy.

The revised budget he sent to state lawmakers this week envisions closing two state prisons in the coming years; cutting nearly one in five of the 43 inmate firefighter camps; and eventually closing all three state-run juvenile prisons.

He’s also seeking unspecified increases to sentencing credits that allow inmates to leave prison more quickly. And he proposes to shorten parole to a maximum of two years, down from five years for felonies, and let ex-felons earn their way off supervision in just a year, or 18 months for sex offenders.

The Democratic governor called it a “core value” of his administration to eliminate prisons and invest more in education. It follows nearly a decade of prison reform in California, starting under Gov. Jerry Brown when the state began keeping less serious criminals in county jails as one way to cut spending during the Great Recession.

“I think it’s incumbent upon us to do more and better in the rehabilitative space,” Newsom said Thursday.

The proposals drew support from reformers, condemnation from crime victims’ advocates, and resistance from county officials who said they can’t take in the serious juvenile offenders who now go to state-run lockups.

Newsom previously won approval to move the Division of Juvenile Justice from the state’s adult prison agency to health and human services so it could focus on rehabilitating youthful offenders.

He switched gears Thursday, proposing instead to bar new admissions from counties starting next year. The state would gradually close its juvenile facilities as the current 800 youthful offenders are released or turn 18 and are eventually sent to adult prisons.

But similar proposals have failed in the Legislature before, and county officials called the new plan unworkable.

Those sent to state facilities “have the most serious needs, which if left unaddressed, pose the most serious risk to our communities,” said Brian Richart, president of Chief Probation Officers of California, whose members already handle about 90% of youthful offenders. “We are not financially and structurally prepared for it.”

Newsom’s administration said counties have plenty of room, with about 3,600 young offenders in juvenile halls, camps and ranches designed to hold 11,200. He proposes annual competitive grants to counties of nearly $10 million for “hubs” to treat youths currently in state lockups because of serious sex behavior or mental health treatment needs.

Newsom in January said he planned to close a single unspecified adult prison sometime in the next five years. With earlier releases often predicated on inmates participating in rehabilitation programs, his revised plan seeks to close one of the state’s 34 prisons by mid-2022 and a second a year later, eventually saving $400 million annually.

His revised budget “reflects what California voters have known for a long time — that continued wasteful spending on failed prisons is bad for safety and our budgets,” said Jay Jordan, executive director of Californians for Safety and Justice, which pushes for shorter prison sentences.

State Sen. John Moorlach, an accountant and the ranking Republican on two corrections oversight committees, welcomed the savings but said it might be even cheaper to use more private prisons, something the state has committed to ending. Prisons are often remote communities’ major employer, he cautioned, saying the governor is also imperiling unionized prison employees.

Democratic lawmakers who control Assembly and Senate oversight committees did not respond to requests for comment.

Closing eight fire camps would save a projected $7.4 million in the fiscal year that starts July 1 and double that in future years. Newsom wants to spend $200 million to hire 600 professional state firefighters and support personnel, in part to make up for a dwindling pool of prisoner fire crews because of earlier releases.

Even with the proposed cuts, the reform group Californians United for a Responsible Budget objected that the state’s projected $13.4 billion corrections budget would be an all-time high, and joined other reformers in calling for even more redirected spending.
Keywords
Newsom Shrinks Prison Save MoneyCalifornia releases more CriminalsCA Governor Shrinks PrisonsCA Budget CutsCalifornia Prisons ShrinkZGoldenReport

The views and opinions expressed in this video do not necessarily represent the views of Brighteon or its affiliates.
Related videos
44:34 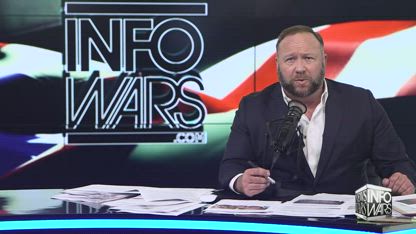 Saudi Arabia Demands Netflix Remove Episode, But Not For The Reason You Think
The David Knight Show
763 views