the Duke's other channel
Published 10 months ago |
In1970s Los Angeles, a pretty girl, in a hooded deep purple mini dress and matching leatherette block heel pumps, is in a sad state after seeing her brother’s corpse at the local funeral home. Feeling worn out, and wanting to be alone, she gives her adieus before parting ways with her girlfriend.
Walking down the nighttime street, the pretty girl’s only companion is the clicking of her heels as sadness absorbed her. Suddenly, the girl gets a tingling up the spine and the overwhelming sensation that she is not alone. Her apprehension becomes so intense that the girl looks all around.
Stopping in her tracks, the pretty girl realizes that the street is empty, no cars, no people, no nothing. Feeling that she has suffered a needless bout of the heebie-jeebies, the girl continues on her way.
Almost immediately she hears a trashcan kick over, and an alleycat scream out. Spooked by that mysterious outburst, the girl shifts her stride into high gear as she sprints down the street. With the loud clicking of her heels, the girl reaches the end of the block and runs right into a stranger that mysteriously appears in her path. Wearing a weird-looking cape, this surprisingly handsome man calls the girl by a strange name.
However, the girl is in no mood for any chitchat as fear is bubbling over inside of her. Breaking away from this stranger, the girl takes off down the street, while the handsome man pursues her. Not knowing who that stranger is or why he’s now chasing her, the girl dives into a pedestrian tunnel to escape him.
Dropping her handbag, The girl leaves it behind for fear that she might get captured if she went back to get it. Exiting the tunnel, the pretty girl disappears into the night as that strange man retrieves her bag.
Emerging from the tunnel, The Stranger sees no sign of the pretty girl as If the darkness of the night has swallowed her whole.
Not watching where he’s going, a Yellow Cab runs down the strange man when he stumbles into the street. Leaping from her vehicle, it surprises the cabbie that this strange man is uninjured. This hack belittles The Stranger for stepping out in front of her cab. Unfortunately for the cabbie, She has just made a fatal error. Now she will find out why this strange man doesn’t have a mark on him after being run over by an automobile. Baring his fangs, this vampire lunges at the cabby and precedes to devour her like a wild animal devours a meal.
Oh well, as far as it goes with this vampire, he’s not a picky eater; he’ll take his blood anywhere he can get it.
Keywords
1970's horror filmblacula (film)girl attacked by vampiregirl being chasedgirl in high heelsgirl in mini-dressgirl running in heelsgirl walking at nightgirl walking in heelsmini-dressnighttimepretty girltaxivampire 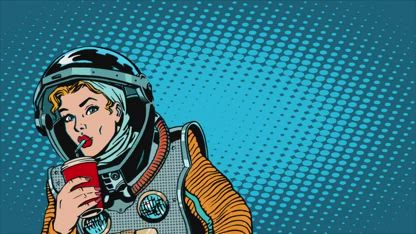 Drink Green Tea Every Day, See What Happens to Your Body
Frozen In Time
131 views
8:09