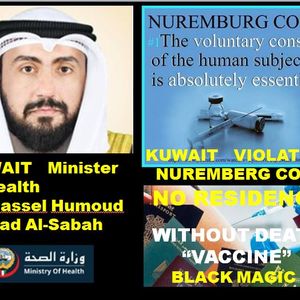 KUWAIT VIOLATED NUREMBERG CODE
Published a year ago |
“This is not a vaccine. This is an mRNA packaged in a fat envelope, that is delivered to a cell. It is a medical device designed to stimulate the human cell into becoming a pathogen-creator. It is not a vaccine.

“They have been abundantly clear in saying that the mRNA strand that is going into the cell is not to stop transmission. It is a treatment. But if it was discussed as a ‘treatment’, it would not get the sympathetic ear of public health authorities, because then, people wold say, ‘Well, what other treatments are there?’

“The use of the term ‘vaccine’ is unconscionable…Remember, Moderna was started as a chemotherapy company for cancer, not as a vaccine manufacturer for SARS…

“If we said, ‘We’re going to give people prophylactic therapy for the cancer they don’t have, you’d be laughed out of a room because it’s a stupid idea. That’s exactly what this is.”

For a treasure trove of information about the criminal scamdemic, the KickThemAllOut Project has assembled a massive online library, where you can find out the truth about everything related to COVID-19: the fraudulent testing procedure, the fake case and death numbers, who Dr. Fauci really is, who Bill Gates really is, the truth about the vaccine industry and the dangers of their products and more.
RECOMMEND BASSEL HUMOUD HAMAD AL SABAH TO THE INTERNATIONAL CRIMINAL COURT FOR USING THIS FAKE VACCINE AS A BLACK MAGIC DEATH SHOT. ASTRAZENECA IS PROVEN TO BE KILLING PEOPLE WORLD-WIDE AND IS NO NOT BEING USED BY 25 COUNTRIES.

There are multiple articles, going back who knows how long, which state that Dr. Robert Gallo is responsible for creating the HIV virus during his stint as a project officer for the US Federal Virus Development Program. It is not out of the realm of possibility to believe that our government hired scientists to create biological weapons. But what it seems happened is that whether on purpose or not, this weapon was released- on gay men in New York and on Africans in Central Africa.

Between 1964 and 1978, the secret federal virus program spent $550 million dollars of taxpayer cash to create AIDS. And many claim it was Dr. Gallo who did it, according to the patent he filed for.
Keywords
black magicwuhanquackjudy mikovitsdr sherri tenpennycovid 19pcrdr andrew kaufmannuremberg codemrna7th military gamesbasselbassel humoud hamad al sabahaobem