The Pete Santilli Show
Published a year ago |
Shop nowDonate
RED ALERT! Silicon Valley is building a Chinese-style social credit system - 1611-6P
An increasing number of societal “privileges” related to transportation, accommodations, communications, and the rates we pay for services (like insurance) are either controlled by technology companies or affected by how we use technology services. And Silicon Valley’s rules for being allowed to use their services are getting stricter. If current trends hold, it’s possible that in the future a majority of misdemeanors and even some felonies will be punished not by Washington, D.C., but by Silicon Valley. It’s a slippery slope away from democracy and toward corporatocracy. In other words, in the future, law enforcement may be determined less by the Constitution and legal code, and more by end-user license agreements. E-Militia Article: Silicon Valley’s Chinese-style social credit system http://ow.ly/23b030pq7mO

GUEST: Jonathan Carpenter of Osceola County, Florida was sitting at home when a mail carrier knocked on his front door. The Florida Department of Agriculture and Consumer Services was notifying him that they have suspended his concealed handgun permit. When he tried to get this case of mistaken identity straightened out he was told that although he was correct about them having the wrong guy he would still have to give up his weapon. It was apparent that the police had the wrong man, but Carpenter was in for his biggest shock yet. The Sherriff’s office told Carpenter he had to surrender his guns. Carpenter never even had as much as a hearing, yet he was losing his rights. “The last thing on my mind was me having to turn over my gun,” Carpenter told AmmoLand. “I was upset when the Sheriff told me that I need to surrender my gun before any due process.
Article: https://www.ammoland.com/2019/08/florida-man-has-firearms-rights-taken-away-over-mistaken-identity/#axzz5xikO163W https://townhall.com/tipsheet/bethbaumann/2019/08/19/red-flag-law-failure-guy-is-stripped-of-his-gunsbecause-of-another-mans-criminal-activity-n2551921
Keywords
Santilli Hannity: Every Republican Should Be Willing to 'Go to the Mat' in Border-Security Fight
NewsClips
127 views
0:44 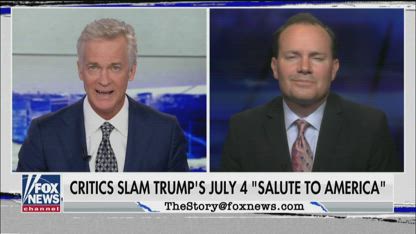