Shroyer was protesting in the same way that “impeach Trump” protesters have just days before, but they weren’t arrested and he was. As he was arrested, Shroyer said “I want everybody to see the censorship in this country. Impeach Trump protesters come here every day and have never been arrested, but I’m arrested today because I have this sign. That’s the attack on free speech in this country. That’s the two-tiered justice system that we’re dealing with. If you’re an Impeach Trump liberal Democrat protester, you get to come here every day with no consequence, but I have security all over me because I’m standing here silently. If that doesn’t show you the attack on free speech, if that doesn’t show you the two-tiered justice system, I don’t know what will.” The arrest was filmed by Infowars producer Savanah Hernandez, who also demanded answers about the hypocrisy she was witnessing.

GUEST:  Peter Boykin is a political commentator, podcaster, author, and former political candidate who lives in Greensboro, North Carolina.  Mr. Boykin is a public supporter of Donald Trump and In 2016, he founded the Gays for Trump organization which gained national attention after organizing support from gay Americans for the candidacy of now President Donald Trump. Peter Boykin and his organization are proving once again to be an important voice in the Trump 2020 run for the Presidency as he continues to challenge the notion that Gay men and women cannot support and  vote for a conservative candidate. PeterBoykin.com

If you have a complaint about something, or find that your copyrighted content is being used incorrectly, PLEASE CONTACT THE BROADCASTER PRIOR TO MAKING A COPYRIGHT CLAIM.  Any infringement was not done purposely and will be rectified to the satisfaction of all parties and in compliance with copyright use Under Section 107 of the Copyright Act 1976 which states, allowance is made for "fair use" for purposes such as criticism, comment, news reporting, teaching, scholarship, and research. Fair use is a use permitted.  Please “see Fair Use" guidelines: www.copyright.gov/fls/fl102.html
Keywords
Gays For TrumpPeter BoykinSilent ProtestCapital HillSenate TrialDiane FeinsteinLive StreamHeadline NewsInterviewImpeachmentProtestPete SantilliArrestedOwen ShroyerTRUMPMAGA

The views and opinions expressed in this video do not necessarily represent the views of Brighteon or its affiliates.
Related videos
3:06 What is Geoengineering
Freedomisntfree
139 views
4:31 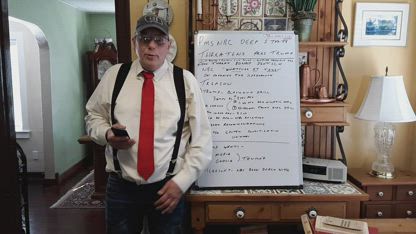