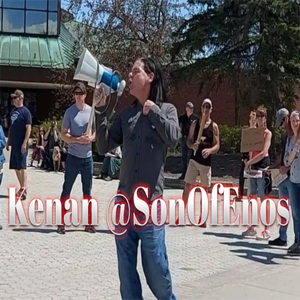 SonOfEnos
Published 2 years ago |
Donate
The Sheep who were foolish enough to get this abomination injected into their bodies are laughing at the fact that they are now magnetic, and are recognized as a low energy Bluetooth signal. The enemy plans for the ones that survive this transformation into the Human 2.0 to be connected to the "5G Internet of Things" where their every thought is known and actions controlled by the AI God the Luciferians worship. They have already stated that they intend to complete their nefarious agenda by the year 2030 which is less than 9 years away.

The Jab is not a precursor to the Mark of The Beast, IT IS THE MARK OF THE BEAST and as we have been warned about in Scripture, those who accept it are truly damned to experience an eternity in hell. I can not think of a greater hell than living as an automaton transhuman cog in the machine.

The Jabbed have been altered to become genetically modified people by the Trojan Horse that is the "Covid-19 Vaccine" and while the fools may be laughing now, assuredly their laughter will be short-lived.