InfowarsFan
Published a year ago |
Alex Jones - America Destroyed by Design (1998)
Uploaded on August 28 2019
Alex Jones Unveils the Orwellian Future. Learn the truth behind the Oklahoma City bombing. Find out who is taking over our parklands. Watch DPS officers sweat bullets and pray for Alex's departure! What is the cost of freedom? Big Brother is here. Watch Alex bravely refuse to take the digital "mark of the beast" thumbprint and how he is arrested by statist drones who dare dress like real policemen.

Today in America you're guilty until proven innocent. If you refuse being a slave and if you refuse to go along with their criminal rules and laws then to the elite you're already guilty. "Oh, but I have done nothing wrong, so why should I fear the government?" That's exactly what the Jews had said too in Nazi-Germany before they were killed in Auschwitz. By generations to come, if humanity survives, Alex will be seen as one of the great American heros.

The views and opinions expressed in this video do not necessarily represent the views of Brighteon or its affiliates.
Related videos
13:48 Spiritual Practices that dont work - What do we do?
We Are The Last Generation
206 views
7:11 Human Tanks Prepped For Your Dead Bodies—From The Grave To Your Dinner Table!
Lisa Haven
417 views
6:37 Bannon: The left wasn't worried about democracy when they were winning
NewsClips
270 views
3:05 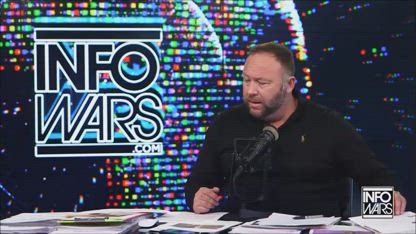