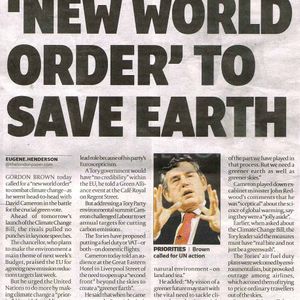 SilverHurricane2970
Published 2 years ago |
President Nana Afuko-Addo of Ghana exposes the pre-meditated Rockefeller-Gates-Fauci depopulation plan. The plan is to keep society under siege, ramping up the severity of quarantines and extended lockdowns over time, with non-compliance met with the deliberate release of a REAL pathogen with 30% mortality rate, until the state introduces mandatory vaccines containing nanotechnology/microchips as the ''solution'' to the problem they caused.

If the vaccines do not cause INSTANT DEATH, they will cause delayed onset of Cancer, sterilisation, paralysis, BRAIN DAMAGE and other SERIOUS AILMENTS - JUST AS HAS BEEN THE CASE WITH THE BILL & MELINDA GATES FOUNDATION AND THEIR PREVIOUS VACCINES PROGRAMS THROUGHOUT THE THIRD WORLD. £60 MILLION GBP was paid recently to the recipients of the H1N1 Swine Flu vaccine. (Why the HELL would ANYONE even have taken it?!)
Reference - https://www.thetimes.co.uk/article/victims-of-swine-flu-jab-to-get-pound60m-payout-02ptvlnlzqk

It is also my belief with my own research that these vaccines will interact with the 5G frequencies and technologies currently being rolled out and cause MASS casualties, as was the case in Wuhan, China. They have not been tested for safety and there is an AGE OLD agenda to roll out forced vaccines coming from the SAME group of people who declare there are ''too many people in the world''. Well-- jump off the Golden Gate bridge first, ASSHOLES!

DO NOT TAKE ANY VACCINES!!!! The fact an institution with a history of EUGENICS has been caught lying and is already engaged in highly suspicious, corrupt activity wants to vaccine and your family, should be viewed with EXTREME suspicion! The U.S. Constitution outlines an oath to defend against all enemies, FOREIGN AND DOMESTIC. ANYONE pushing vaccines is an enemy of the people- AND THAT INCLUDES THE PRESIDENT OF THE UNITED STATES!!!!!

Bill Gates is a man who cannot be trusted, not ONLY his public statement of wanting to REDUCE THE WORLD POPULATION, not ONLY due to the fact he is financing the UK and U.S. Governments in their ENTIRE RESPONSE TO CORONAVIRUS, giving 40 MILLION to the UK Chief Health Secretary, financing the SAGE advisory board who are instructing the UK Government, and financing the World Health Organisation, not ONLY given his membership of the Bilderberg Group (which mainstream media claimed ''doesn't exist'' for decades) but ALSO for his patent for a cryptocurrency system in the human body responding to sensitivity data. WO2020060606 (The Mark of the Beast?). If it were the Mark of the Beast, you would damn yourself eternally by taking such a vaccine.

Gates' father was the HEAD OF PLANNED PARENTHOOD in the United States- an organisation responsible for ABORTING HUNDREDS OF MILLIONS OF BABIES! This in itself should be enough for you to know these bastards cannot be trusted or respected!

5G is also being rolled out throughout the world through Elon Musk's SpaceX which will beam 5G at the Earth from space, and these frequencies ranging from 60Ghz-300Ghz+ can even control the mind. (There is also even a patent for ''Voice to Skull'' technology which 5G technologies manipulate to make you HEAR VOICES INSIDE YOUR HEAD, making you think it is from God! Perhaps this is the MASS DECEPTION, warned about in The Bible?)
Keywords
alex jones5grockefellergerald celentebill gatesbill cooperlindsey williamsanthony faucicoronaviruslockstepcovid-19nana afuko addo